EML Sports where we love sports and we know the web inside out. We specialise in web based software for sporting clubs and organisations so you can focus on your athletes, helpers, officials and all involved. We help you grow your club with reduced paper work and without getting bogged down with technology.

The original event registration system was created for Australian Masters Athletics and used at their national championships in Perth in 2010. It has been used for another 6 national AMA titles, Oceania Masters Championships, AMA Winter Throws plus WA Masters State Titles since 2011. And the list is growing. 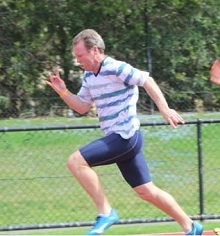 EML Sports was founded by Ernie Leseberg, a still competing masters track and field athlete and occasional footballer (soccer). Growing up he played a range of sports including rugby league, rugby union, basketball, cricket, football plus Little Athletics. Ernie has been on committees for his then local track & field club as well as the NSW Masters club. For 5 years he also served as webmaster for Australian Masters Athletics (AMA) and was awarded Administrator of the year in 2011. Professionally he has over 20 years of experience in web based software development. Now with growing children he can be found raking a long jump pit, the ref or coach at his kids Saturday football games. All of this gives him a unique insight into the issues faced by sporting groups and how a little technology can help.

Monica played basketball and volleyball in youth and prefers to spectate these days, though cricket still confuses her. Monica has become involved in testing of the systems and documentation.

EML Sports is based on the Central Coast of NSW, Australia and all of our software is proudly developed and maintained in Australia.